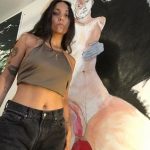 Adriana Raquel Ramirez was born, lives, and works as an artist in Oakland, California. Her mediums are mostly oil paint and pastels, but varies and expands with time. She mostly focuses on portraits and their connection to the concept of self identity.

In Ramirez's work she is interested in the relationship between self-identity and our surroundings in their emotional, historical, traditional, and social capacities. Sometimes she paints herself, but mostly she paints other people. By taking a photo reference and abstracting it to represent people as more than a one dimensional image, she is asking the audience to deconstruct the unconscious construction of their identity, "I want them to question how it leads to a conscious, proclaimed self, as well as how the conditions around us affect this process. Ultimately, I want people to know that I see them. Not just for what a visual society says they are but for the various states of self that they are always in". Being merely “a painter” without doubt ensures one status of a far greater weight than being “a woman of color who paints” ever does. How we identify and how we are identified are two very different processes that we struggle with. The tension between the two affects one's identity as a woman of color and as an artist. Navigating identity with “the master's tools '' is how Ramirez intends to undermine the automatic discrediting, through gendering and racializing, of her passion and skill. To question identity, the self, and it’s ongoing processes as an artist, and as a woman of color, is to advocate for a future generation of artists to have the flexibility to define themselves.