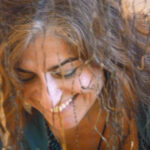 Dimitra Skandali (b. 1969, Athens) grew up on Paros, a Greek island in the Aegean Sea. “I carry my island with me everywhere and this shapes the way I see the world”, she states. Her installations allude to increasing environmental risks alongside with human migrations and struggles about identity. She was educated in Greece (ASFA, 2006-2010) and the Netherlands (HKU, 2008-2009) before coming to California, and earning her MFA in New Genres from San Francisco Art Institute (2011-2013)."

The experience of growing up on Paros, an island in the Aegean Sea in Greece, and my journey since then to build a community across the oceans, is central to my work. I carry my island with me everywhere and it shapes the way I see the world. I create installations inspired by their exhibition spaces weaving together found elements from those locales to create ethereal forms; reminders of the sea, with its openness and possibilities, as well as its fragile and unstable limitations. The process of familiarizing myself with these new places through the search for materials helps me to weave together points of connection in an ever expanding web, even if only temporarily.