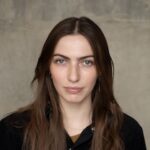 Sophia Feuer is a filmmaker and multimedia artist based in Brooklyn, NY. She was raised in Chicago, Illinois, while her father and extended family originate from Germany. Sophia works as a Director and Director of Photography in New York and is a dedicated youth arts educator, teaching at the Jacob Burns Film Center (NY), SFFILM (CA), and Larkin Street Youth Services (CA). She is the current Valentine & Clark Emerging Filmmaker Fellow at the Jacob Burns Film Center.

My art has been a tool to turn things inside-out. To look at things with the flesh peeled back. I have often wondered while doing this, for example, what does a human really look like? I imagine the form of a whole human nature curled beneath the skin: hiding or forgotten. Something that manifests itself as rather "un-human," with only a resemblance to the corporeal facade that we wear day-to-day. By tuning myself to tensions that occur between body and spirit, I seek to examine the ubiquitous dualities and contradictions that form the epicenter of the cyclone encompassing human nature.

Sophie Feuer: Curled Beneath the Skin